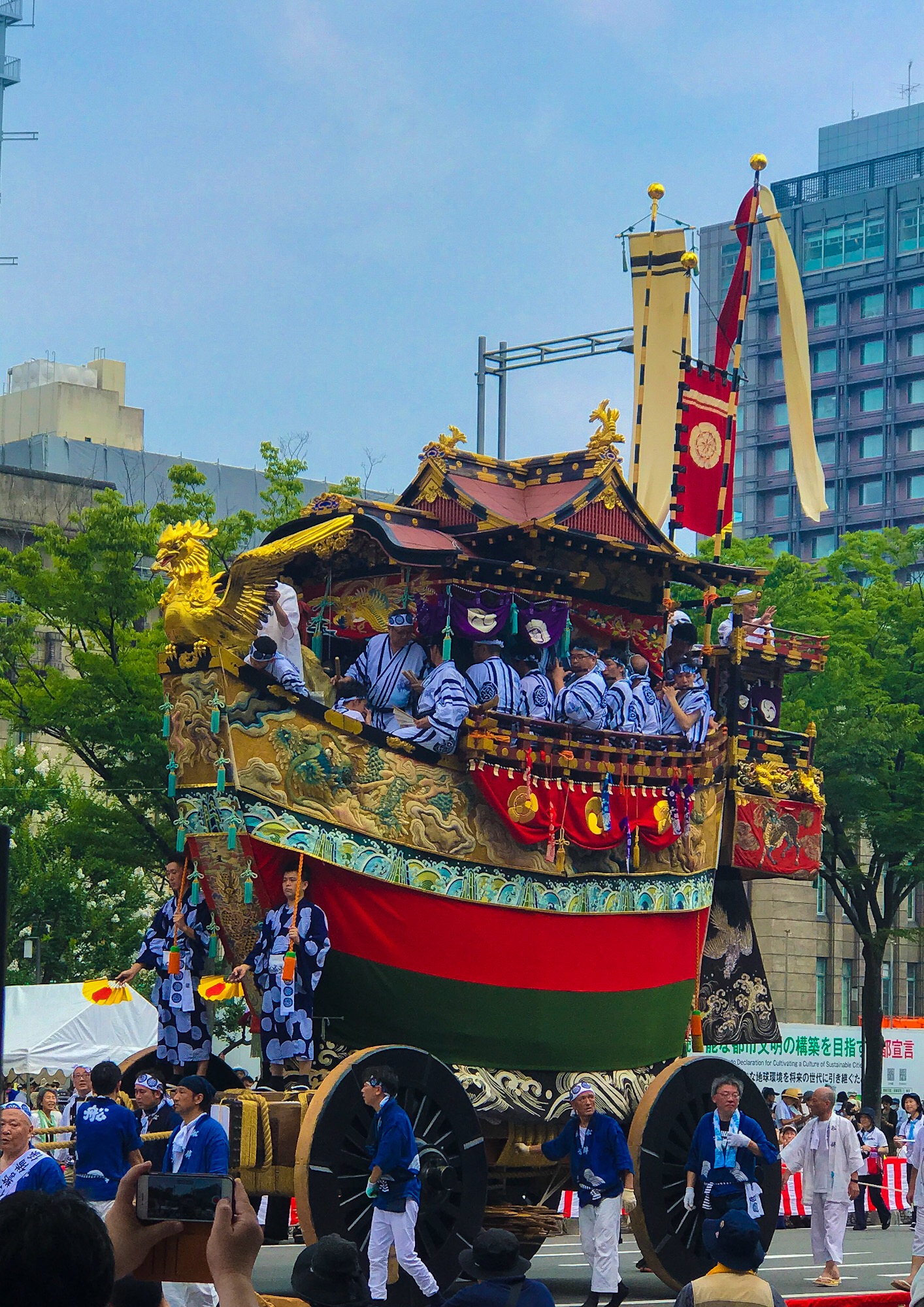 One of the most famous festivals in Japan is without doubt Gion Festival (more commonly called Gion Matsuri). This event attracts visitors from all over Japan and abroad for an entire month of celebration. As a big fan of festivals, especially colorful ones, I immediately fell in love with Gion Festival.It’s actually hard not to, since the whole city is in a celebrative mood from the beginning of July. You can hear traditional music all around the city. Impressively, huge floats are placed all over downtown Kyoto for people to look at and enjoy. Naturally, I want to share exactly what is so great about this festival! So where do I start? I guess from the beginning…

How did Gion Festival start?

Although the current style of the festival was formed only in the 15th century, it’s story goes back to 869 AD. In that year a terrible epidemic spread through the whole country. The reason was, apparently, that the gods were angry and therefore punished humans.Following this, the emperor commanded his special messengers to pray to the gods of Yasaka Shrine, hoping that this would put an end to the epidemic.

Sixty-six decorated halberds were erected towards the shrine, representing the number of Japanese provinces at the time. Young men from around the city and nearby villages carried Portable shrines (called mikoshi) towards the shrine as well. All for the sake of stopping the disease from spreading. And what do you know? It worked! About 100 years later, in 970 AD, they made it a law to celebrate the festival every year.

If you have ever visited Kyoto before, you’ll know that Yasaka is the main shrine in the Gion district. Therefore, the festival is called “Gion Matsuri”. The festival celebrations last for around one month, covering many ceremonies and rituals. It fills the city with music, decorations, and many people can be seen wearing colorful yukatas. Instead of the halberds, there are now thirty-three floats, called yama and hoko, each belonging to different neighborhoods in or around the city. If you want to learn more about the differences between yama and hoko, follow this link.

The floats are the main highlight of the festival. You will notice them displayed in the city and carried around in two different parades. To make the floats more eye-catching, they are frequently decorated with fascinating ornaments from Ancient China, Persia, Old Korea, Holland, and France.Some of these items are ancient treasures that Japanese imported from the mainland. Take a good look – many of them are really spectacular!

You won’t be able to take your eyes off of the floats, they are truly magnificent. Some of them are very well-distinguished: the boat (Ofune hoko), the mantis (Toro yama), and the umbrellas (Shijokasa hoko and Ayagasa hoko). There are also many floats with puppets on top, each representing mythical tales and historic events. All the floats are carried by men (and sometimes women) brave enough to stand the end-of-July heat in the valley.

During July, there are many events relating to the festival. The two main dates to put in your diary are the 17th and the 24th. On these days the floats are carried around downtown to the eyes of thousands of viewers. On the 17th all the floats are in the parade, while on the 24th fewer (and smaller) floats participate. I won’t lie – it’s really hot and humid. So, TIP 1: take your biggest hat, sunscreen, LOTS of water, and find a good shady spot. One more thing you can do in order to spend less time in the sun is Tip 2: you can actually walk counter clock-wise to the parade’s route. You will see all the floats in less time, and they’re moving kind of slow, so you’ll have enough time to enjoy each of them.

Besides the main events, from the 14th until the 24th the floats are on display around the intersection of Shijo and Karasuma. The area is closed to traffic at night time, and many locals and visitors walk around these streets. You can find food stalls, live flute music, and the floats, along with Japanese lamps lighting the night sky. Some of the floats even invite you to look inside for a fee. It’s a very celebrative atmosphere!

How should you dress for the festival? Well, I know that in many photos from Gion Festival you can see locals and tourists wearing Kimonos and Yukatas. My advice: don’t! (This would be Tip 3.) You should wear as little as you feel comfortable in (within the norms of Japanese society… you don’t want to be stared at!). It’s going to be very hot and humid, so carefully consider each and every layer you plan to wear. I actually wear long light sleeves, as we must also remember the importance of protecting ourselves from the sun!

Tip 4: Another thing you can do to prepare yourself: bring a fan! You can either buy one or get an uchiwa fan for free (the one pictured below). Some shops give away these uchiwa fans for free, as there are commercials printed on them. You will not regret bringing one!

Tip 5: In order to plan your time well, you can click here to see when the parade is about to pass different spots on the route. Either save it in your smartphone, or look for a brochure that shows the map when you’re in the city. Last year I found a super-helpful pamphlet written by Kyoto City Tourism ASSN. It included all the festival details, including the events, maps, and then a summary of each and every float’s story. Search for it in your hotel lobby, train stations, or tourist information.

Tip 6: Search for an elevated platform to stand on, preferably in Oike street. People usually gatherat the start and end points of the parade, so Oike is the best street to watch it when considering the number of people around you.

Overall, Gion Festival is the most lively period in Kyoto, so I really recommend to go if you can. Compared to Aoi Matsuri and Jidai Matsuri, Gion Matsuri is definitely my favorite and the most energetic festival. Following the tips above, there is nothing else for you to do but enjoy it! 😃

The Secret of Japanese Incense – A Visit to SHOYEIDO

Markets in Kyoto – Three Markets You Must Visit