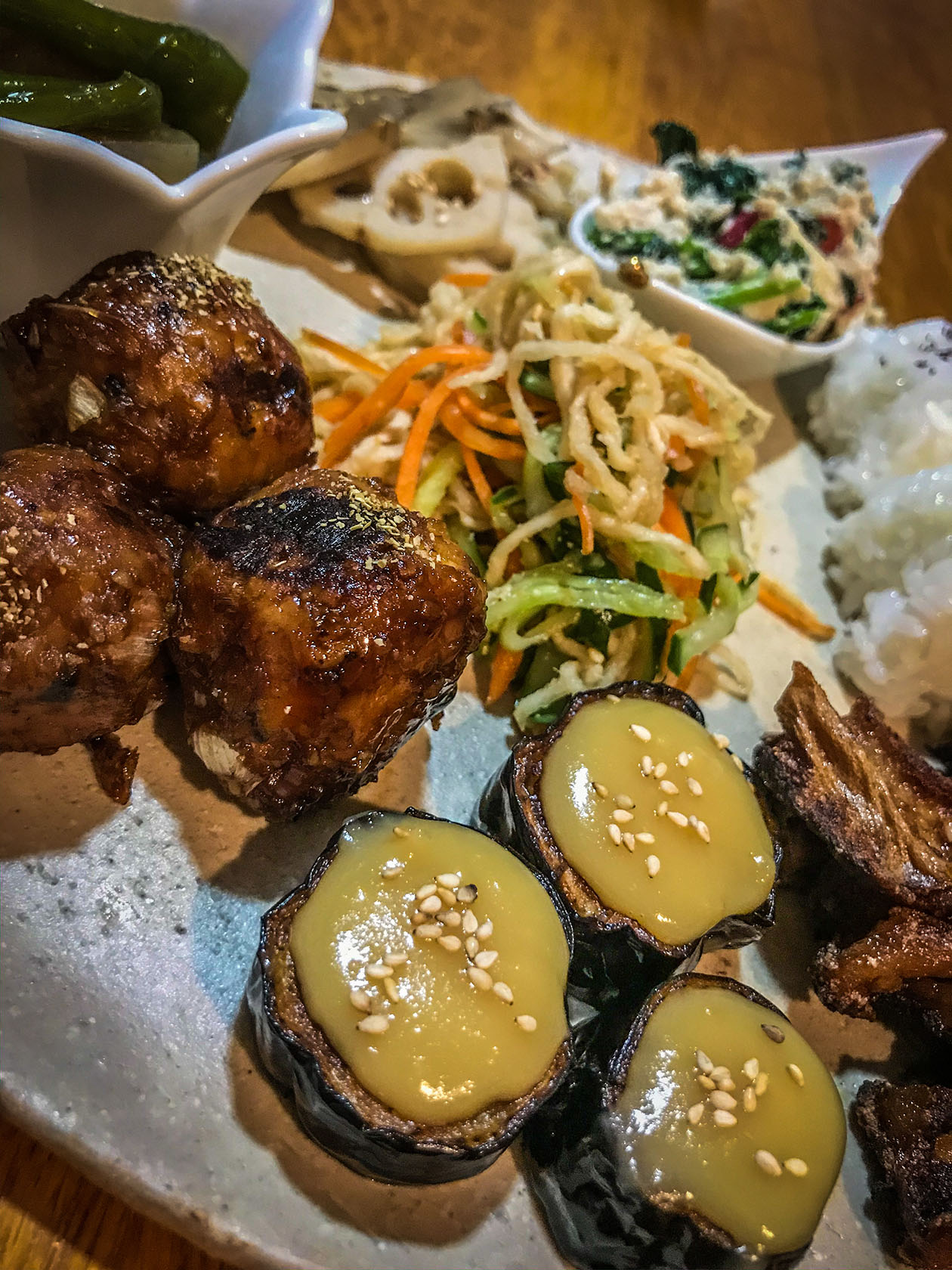 Vegan food in Japan is not very prevailing once you’re away from the touristic areas. While finding vegan food is hard, it’s even harder to find a vegan Japanese cooking class. In some areas of Japan, it might seem impossible. The thing is – Japanese food is historically based on fish stock and marine-food in most of its dishes. The most innocent tofu might be flavored with dried bonito or little shrimps – it can’t be helped.

But what if I told you that apart from these Japanese non-vegan dishes, there’s another Japanese cuisine that has developed far away in the silence of meditation and the fresh air of the mountains? I’m talking about the cuisine of Buddhist monks, which involves cooking without harming living creatures, and therefore, was originally vegan. This style of cuisine is called Shojin Ryori – traditional Buddhist monks’ food.

In this post, I will tell you all about the Shojin Ryori class I had in the most casual and authentic place. It was a really unique experience.

Did you ever ask yourselves what do zen monks eat? The answer is: Shojin Ryori.

Literally meaning “devotion food”, Shojin Ryori is common in various countries in Asia where Buddhism is present. In Japan, this type of cooking was originally prepared and eaten by monks since the 13th century when Zen Buddhism was first introduced. While in other countries you can find various kinds of vegan meals eaten by monks, in Japan, Shojin Ryori is quite structured.

Shojin Ryori is based mainly on tofu, sesame, fu, miso, rice, and seasonal vegetables. You can also find quite a big variety of root vegetables such as daikon, lotus-root, and bamboo-shoot.

In this sense, Japan is different from other countries. In the traditions of Buddhist cuisine, eating root vegetables is believed to prevent the plant from continuing its life cycle, soin other Asian countries, Buddhists don’t eat them.

Well – in Japan they do (however, garlic and onion are an exception and are not eaten).

Fu is also quite unique – it’s steamed wheat gluten mixed with mochi rice flour. It might look like bread but its texture is completely different. For the making process of fu, see this video – it’s really awesome!

Aside from the ingredients, there are two more principles of Shojin Ryori. One of them is that the meal must have five colors and five tastes. The colors are black, white, green, red, and yellow, while the tastes are sweet, salty, bitter, sour, and umami. Umami can simply be translated to savory, or a taste that contains a high level of amino acids. But it is better to explain it like this: try to taste shiitake and Kombu dashi – that’s umami!

Other posts you’d want to read:

Besides in temples, Shojin Ryori may also be served in the Obon (a Japanese holiday) and funeral dinners (although not necessarily).

Please be careful – some restaurants serve Shojin Ryori with fish stock or other kinds of non-vegan ingredients. This is one of the reasons why I wanted to learn how to make it myself. I was also just curious to know how to cook it whenever I feel like it. I wanted to learn all about the basic ingredients and the cooking style. Therefore, I feel so lucky that I got to know Air-Kitchen – it helped me to find a local Japanese expert that could teach me how to cook in her own house! There’s no better way to meet local people than through cooking and eating with them 🙂.

I’m always searching for an authentic experience wherever I go. It’s one thing to see the place from a touristic point of view, and a completely different thing when you get to know the locals. What better way to know the Japanese culture than from visiting a local’s house and learning to cook the local dishes?

That’s exactly what Air Kitchen is for. It’s a network established in 2018 that connects Japanese people all over the country, who wish to teach how to make authentic Japanese food from their houses, with visitors who wish to learn how to make local dishes in casual settings. Isn’t it a great initiation? You can find Air Kitchen hosts all over Japan, and choose what you want to cook from endless options. Besides being a great experience when in Japan, it’s also nice to have a meal with local Japanese people. You then get the opportunity to ask them about their culture.

I really appreciated the fact that there are special filters on Air Kitchen to search for vegan and vegetarian classes. Besides being helpful for vegans, if you have dietary or religious restrictions – you can still cook and eat without being afraid that there’s something in the food that you want to avoid. As a very suspicious person (sometimes 😉) – what a relief!

Out of the classes held in Kyoto, I registered to Yukari’s Shojin Ryori cooking class (which mentioned in the title that it was vegan), but I didn’t know what to expect. I’d never tried to cook anything like this before, and I didn’t know what the ingredients would be. I think I was mostly afraid of ruining the food. It’s one thing to mess things up in your own kitchen, but something else to mess it up in someone else’s…

Fortunately, Yukari led me step-by-step through all the different dishes (and there were a few of them!). She taught me so many things about the local Japanese kitchen tools, special Kyoto vegetables, and very cool food preparation methods.

It was like a new world had been revealed to me! groceries I’ve always seen in the supermarket but never stopped by, were apparently vegan and super delicious when you know how to prepare them correctly. Yukari has a really large work space so it was really easy and convenient to make all the dishes.

After almost two hours it was finally ready – our Shojin Ryori colorful plates!

Although we didn’t use any spices, nor onion and garlic – this meal was so tasty! I almost considered becoming a monk just so I could eat it every day 😉. If you haven’t tried Shojin Ryori – you should definitely treat yourselves with it once.

I loved the combination of the tastes and cooking styles: steamed, fried, cooked, and raw. It created such a great symphony of flavors and textures, more than I could ever imagine.

One of the things I was most amazed about was how full I was at the end of the meal. At first, it looked like many tiny dishes. I could barely walk home lol! It was such a great evening.

If you want to enjoy an experience like this on your trip to Japan, or while living in Japan, I highly recommend searching for the ideal Air Kitchen host here, so you can fully enjoy all the flavors this amazing country has to offer. Japanese food is so diverse, and there’s no reason vegans can’t enjoy it to the fullest 🙂.

What Japanese cooking class will you take?

Let me know in the comments!

Tadao Ando – The Japanese Architect Everyone Needs To Know

KOBE – A Great Daytrip From Kyoto