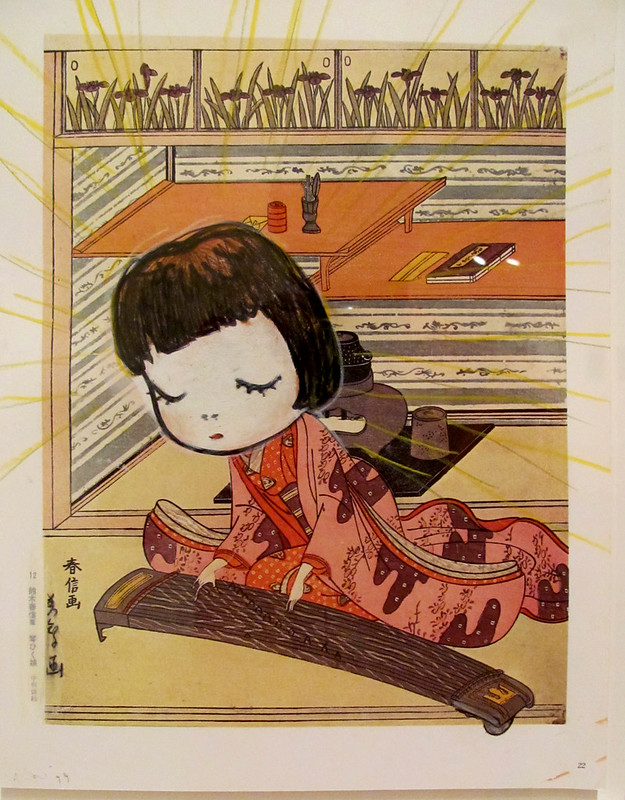 One day I was walking the streets of Kyoto when suddenly I saw a small boy, not yet at school-going age, wandering around on his own. I tried to ask him where his parents were, but he didn’t answer. He just smiled at me silently. He was so sweet and helpless and I really wanted to help him. He led me to a playground about 50 meters away from the place where I saw him. Abruptly he ran to the playground, turned to face me and did something extremely unexpected: he drew a gun from his pocket!

But that feeling of something cute that turns out to be evil, something innocent with a thorn, a feeling that can’t be given a precise name – that’s exactly the feeling I get when I see Yoshitomo Nara’s work.

While Nara’s pieces might look like art from the world of manga, like his contemporary, Takashi Murukami (who I wrote about in this post), Nara maintains that his inspiration is completely different. “The truth is, I haven’t been influenced by manga even once. Over a long time, I created my art from a spiritual perspective. It’s full of religious and philosophical considerations,” he said in an interview some time ago.

Nara is mostly known for his paintings of children and animals, but apart from paintings he also works with sculptures, ceramics, prints and installations.

He was born in 1959 in the cold northern Aomori Prefecture of Japan only seven years after the end of the US occupation, and admits that he was highly influenced by the overseas culture. As a child, he had plenty of time home alone, and listened to foreign radio stations. He was exposed to western rock music, and was influenced by the films of Warner Bros. and Walt Disney, and by American comics. After obtaining an artistic education in Japan and in Germany, he started making his way in the world of contemporary art, and broke into popular consciousness through the Japanese pop movement in the 90s.

Nara maintains that some of his primary influences are the music albums he collects (he has over 350 records). He explained that, because there were no museums where he grew up, his exposure to art came only from the album covers. Although his pieces are greatly influenced by music, he said that they never refer to a specific song, film or book, but can be influenced by these and then acquire a nature and life of their own.

Music gives him inspiration by creating a picture in his mind’s eye, which he then sets about creating. Perhaps that explains why Nara, unlike many other first-rate artists, doesn’t employ an assistant, and has been creating all his art single-handedly since 1984. Some of these pieces also include collaborations such as album and singles cover designs for famous bands, among them REM’s single I’ll Take The Rain (for which Nara also created and directed the music video). Recently he also teamed up with Stella McCartney for her new capsule collection.

Despite the cute appearance of his pieces at first glance, there’s often something devious about them. A girl with a sharp canine and a wicked look, a boy with a knife – but Nara refuses to see them as evil. He maintains that the boy with a knife is, after all, a little boy with a small knife in a world of adults with far more terrifying weapons.

One of the incidents that had the greatest influence on Nara’s style was the major earthquake in Tohoku in 2011. “When the tsunami struck I was filled with sorrow. I felt like art could be of no use in a situation like that. The thing that got me creating again was using my hands, and not the tools I normally paint with. Then I started sculpting soil. Afterwards the sculptures turned into bronzes.” One of Nara’s best-known sculptures that was made following the tsunami is Miss Tannenbaum, whose continuation is the eight meter piece Mori No Kodomo (child of the forest) – a girl growing out of the ground and turning into an antenna connecting the earth and the sky.

At the end of the day, what Nara is trying to convey in his pieces is a new way of seeing the world, and he says that each of his pieces contains many clues he hopes people will notice. His greatest hope is that the people who look at his artworks will see the journey and the process that he, Yoshitomo Nara, is going through as a human being.

Not Only Sakura - Japan’s Most Stunning Blossoms – Save This Post!