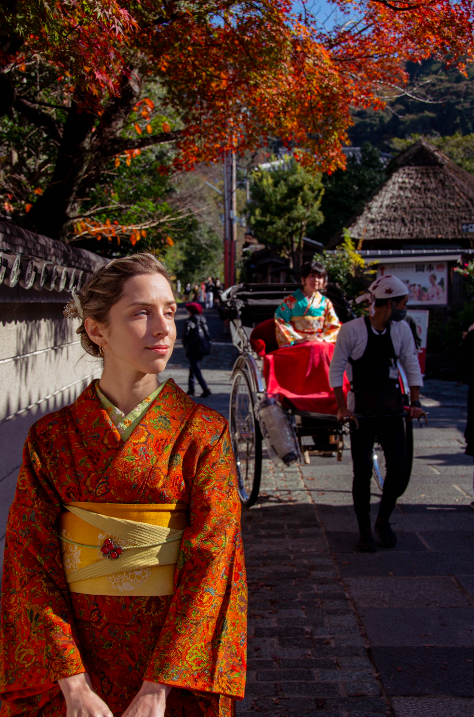 Kimono – All You Need to Know About The Japanese Traditional Dress!

It was April 2020, when our whole world turned upside down. My beloved partner and I went to walk the streets of Higashiyama in Kyoto, to see the most beautiful and bustling spot in the city deserted in the middle of the day. It’s a sight I’ll never forget. Like a ghost town that’s been frozen in time for 200 years. On the way, we saw a jinrikisha, a strong man who pulls a rickshaw – a popular attraction in the touristy city – standing around helplessly waiting for non-existent clients. We asked him how many jinrikishas were working that day. Wearing a thoughtful expression, he replied: “There are five of us today. Normally there are forty of us.” I doubt that any of those five got any work that day.

And then we saw them. A couple wearing kimonos and walking toward the famous Yasaka Pagoda. It was just the two of them, the pagoda and the empty streets. In the fraction of a second before I took a photo of them (you’ve simply got to take a photo of a sight like that) I thought “Thank heavens kimonos exist – so much beauty in one item of clothing.” I’ll probably never know who they were, but I’ll always remember the beauty of them walking in kimonos down the streets.

So today’s post is entirely dedicated to the kimono, the traditional Japanese garment which, like everything else in Japan, abounds in aesthetics, and tells us about the centuries-old culture that has been preserved on this one-of-a-kind island.

How did the Kimono actually get to Japan?

Through China. Just like chopsticks, logographic writing, tools, customs, art and philosophical ideas, the kimono originated in China. It’s believed to have arrived in Japan in the fourth century. Years later, Japan’s nobility adopted this unique garment, which is T-shaped, has a long body and straight sleeves, and is wrapped around the waist.

During the 8th century (710-794, the Nara period) the norms for wearing the kimono were established, and it was decided that it would always be fastened in such a way that the left side covers the right. And so it remains to this day. In fact, the only people who wear a kimono with the right side covering the left are the deceased before they are taken for cremation and burial.

Over time, one layer of kimono was no longer considered sufficient. During the Heian period (794-1185), it was thought to be more aesthetically pleasing to add more and more layers under the kimono. Noble ladies took pride in kimonos with as many as 12 (!)  layers, with the colors of the various layers visible only on their sleeves and collars (and the colors had to match! The Japanese have never been careless with their aesthetics). Underneath all these layers, they wore an item called kosode, a silk robe with short sleeves. The men also wore a kosode under their everyday attire, but theirs had fewer layers above it.

In fact, the kosode is the distant ancestor of the kimono as we know it today. During the Kamakura period (1185-1333), people started wearing the kosode as a legitimate item of clothing in its own right and dyeing it using a variety of techniques that developed over time. In the Edo period (1603-1868) the kosode took the form that today is called a kimono, a word that literally means “a thing to wear”.

So what is a kimono?

Pretty much the upper robe. But you can’t wear a kimono without all the accessories: Firstly, the kimono worn by ladies is fastened with a broad belt called an obi. There’s also an obi for men, but it’s narrower. The obi is a narrow strip of cloth several meters long that is wrapped around the waist and tied at the back. There are numerous possible knots for the back, depending on the type of kimono, the type of obi, and the occasion for which the kimono is being worn. An obi is typically adorned with a piece of jewelry on a string that is also wrapped around the waist.

Apart from the obi, a robe must be worn beneath the kimono to prevent the kimono from touching the skin directly, plus another robe whose collar sticks out from beneath the kimono. To all of this are added a pair of zori shoes (Japanese thonged sandals) and beneath these white tabi socks, in which the big toe is kept separate from the other toes. What’s more, when wearing a kimono one’s hair must be up – it’s rare indeed to see a woman wearing a kimono with her hair loose.

Because there are no zips and virtually no buttons on any of the layers, fastening is done using strips of cloth wrapped around the waist. Sometimes additional pieces of cloth are worn underneath the upper kimono to keep specific parts in place. So if you thought that wearing a kimono was something trivial – think again! Matching the various parts, putting it on, and even folding the kimono require skill and training. Personally, I can’t wear it all by myself 😉

Who wears a kimono these days?

Since the end of the 19th century, the kimono has lost its status as everyday attire, but it’s still worn in special cases. For occasions such as graduation ceremonies, weddings, funerals, official meals, tea ceremonies, 20th birthday parties and other formal occasions it’s customary for the ladies to wear kimonos. Men have fewer opportunities, the most notable one being their own wedding.

There are also professions for which wearing a kimono is compulsory, such as geishas, sumo wrestlers, waitresses in certain restaurants, and jobs whose dress code is a kimono (stores that sell Japanese products, for example).

There are several types of kimonos and each one is suitable for a different occasion. For example, at graduation ceremonies ladies normally wear a long-sleeved kimono and over it a hakama skirt, together with closed boots (although one can also wear zori shoes). The same style is also appropriate at archery competitions in Japan.

A couple during wedding photoshoots.

Where can I buy a kimono?

First of all I must mention that kimonos don’t come cheap. Most are sewn by hand, and as a result your average kimono could cost tens of thousands of yen (hundreds of dollars). If you want to buy a kimono without breaking the bank, here are a few more options:

Buy a second hand kimono. There are plenty of second hand stores in Kyoto, such as this one, which sell (among other things) kimonos. You can also find second-hand kimonos in Kyoto’s monthly markets which I wrote about in this post. Just note that buying a kimono is only one part of it – in order to wear it properly, you should also get the undergarments, strips of cloth, zori shoes and tabi socks.

Buy a yukata -the more convenient summer version of the kimono. Yukatas are made of cotton and can be worn without special undergarments. Because it’s a lot cooler, and Japan gets really hot in July-August, yukatas are typically worn to summer festivals. They are also worn at home, at ryokans (a traditional Japanese hotel) and at other hotels.

Rent a kimono while you’re in Japan. On the streets of Japan there are countless kimono rental shops which let you wear a kimono for a day and then return it. The stores have a large assortment of kimonos to choose from, as well as matching accessories and handbags. If you like, you can even request a hairstyle from the selection the place offers. Kimono rental normally costs around 5,000 yen, and there are places where you can return the kimono a day later or even leave it in the hotel lobby. Last time I rented one from Rental Kimono Okamoto which has a number of branches in Kyoto. I booked it online, which was super convenient, and got excellent service. By the way, they also have an English website with an easy to understand booking system.

Fukuoka - An Out-Of-The-Box Trip To Japan