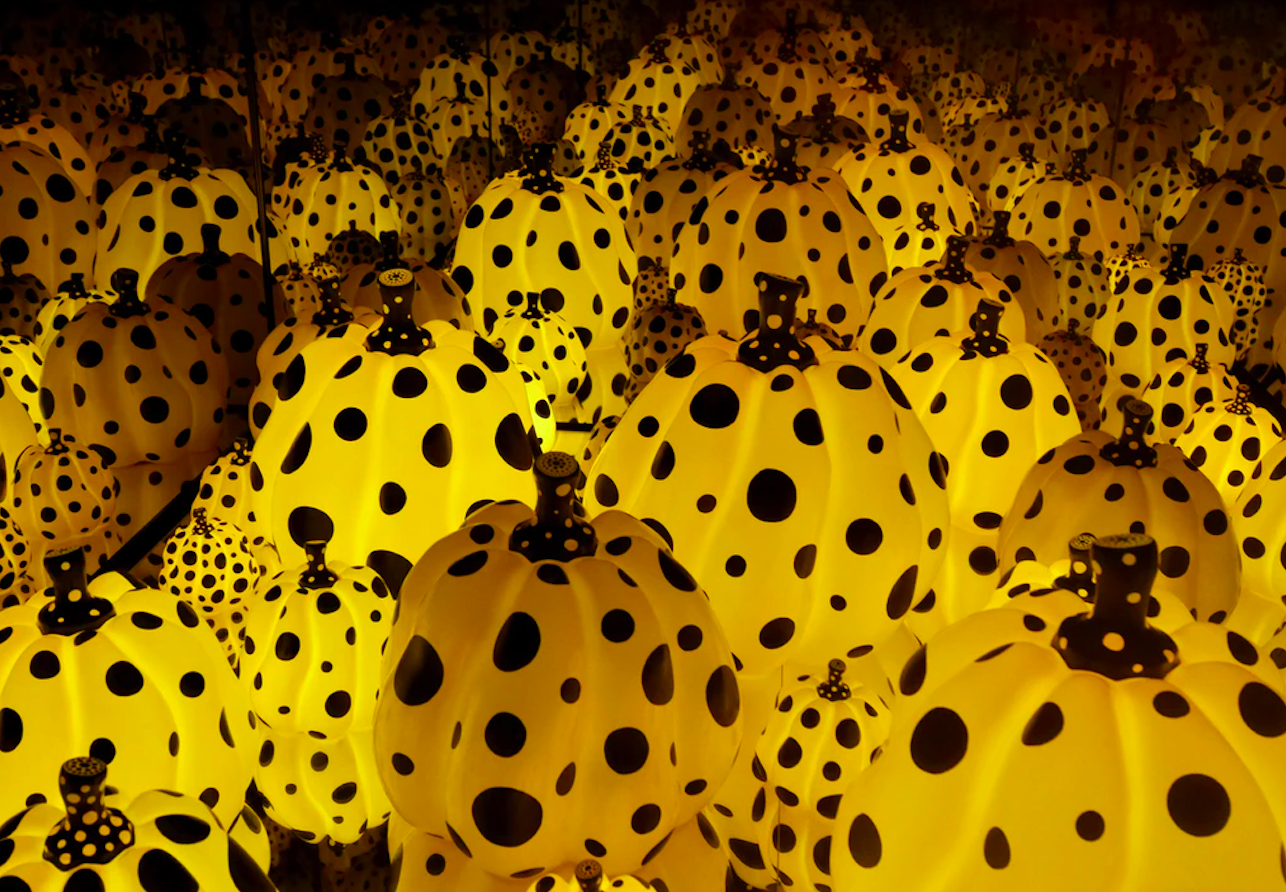 Yayoi Kusama – What’s With All The Hype?

“One day I was looking at the patterns of the red flowers on a tablecloth. When I looked up, I saw the same pattern covering the ceiling, windows and walls, and ultimately the entire room, my own body, and the universe! I felt like I’d begun to self-destruct, to spin in the infinity of endless time and absolute space and to shrink into nothing.”

Yayoi Kusama had been through a thing or two in life before becoming one of the most successful, acclaimed and best-sold contemporary artists, even in her tenth decade. Having had a difficult childhood in Matsumoto, she was a poor artist in New York, tried to commit suicide (twice), and eventually voluntarily committed herself to a mental health institution. But she didn’t just manage to survive, she created a visual language unique to her that is recognizable from miles away.

I’ve been asked on more than one occasion “What’s the big deal?” Her dots? The pumpkin? Why all the hype? What makes Yayoi Kusama special? Aren’t other Japanese artists who are just as special?

In this post I’ll try to answer all these questions and take you into Kusama’s world. A world of unparalleled fascination.

*Kusama is her surname and Yayoi is her given name. Since in Japan it’s customary to put the surname first and only then the given name, the artist is usually called Kusama Yayoi, as she’s referred to in Japan. In any case, it isn’t a mistake to call her Yayoi Kusama.

So who are you, Yayoi Kusama?

Kusama was born in 1929 into a family based in Matsumoto, at the foot of the Japanese Alps. Although outwardly everything seemed fine, Kusama suffered from a young age. Her mother always suspected that her father was cheating on her, and sent little Yayoi to spy on him. Kusama recounts that it was traumatic for her and that she was very put off sex as a result of these experiences. She coped with this trauma by developing an obsession with phallic shapes in her creations.

The young Yayoi suffered from panic attacks and hallucinations. She recounts that she saw herself and her room all covered in dots, saw them multiplying and could do nothing to stop it. The paintings in her childhood she would cover with dots, because that was how she saw the world. But were her paintings appreciated back then? Not exactly.

You know how it is when a child shows his mother a stick-man drawing and the mother gets all excited as if the child has recreated “The Last Supper”?

Well, Kusama’s mother was a bit different… She wasn’t all that excited by her daughter’s paintings. She wanted her to start aspiring to an orderly life as a devoted wife, and not as a rebellious artist. She took all of Yayoi’s paints and tore up her paintings. Obviously, this achieved the opposite result: little Yayoi just painted more and more, from dawn till dusk, with anything she could find in the house. At some stage her mother told her that if she wanted to paint, she must leave the house and not return. And that’s exactly what she was going to do.

After she studied traditional Japanese art and even getting a few exhibitions in Japan, Kusama, who was now grown up, decided to put some distance between herself and Japan. In the late 1950s she flew to New York, to the land of liberty, where she would have the freedom to be who she was with no strings attached.

She didn’t have it easy in New York. She wasn’t immediately understood, and it took some time for her to start selling artworks. They say there was a time when she slept in her studio on a door placed on the floor, because she couldn’t afford a bed. Eventually her work was recognized and after she managed to sell paintings, she tried out new things. She performed, made exhibits, and adjusted to the zeitgeist in works that emphasized the spirit of pop and avant-garde of the time.

Kusama did become a highly regarded artist in New York, but the hard work and the fact that she still couldn’t earn a decent living led to crises and several suicide attempts. In the early 1970s, she went back to Japan in a difficult mental state and in 1977 voluntarily committed herself to a mental health institution, where she lives to this day. She wasn’t so well known in the Japanese art world, but that was also about to change.

What is Yayoi Kusama doing today?

Kusama is indeed living in an institution, but her studio is just down the road, and she goes there every day. She works from 9 AM until 6 PM, and sometimes, she admits, even into the night. This setting gives her the confidence to keep creating obsessively her creations, which themselves describe obsession, repetition, and an accumulation of details.

Apart from the dots, which are so recognizable with her, and the phallic motifs which have characterized her works, Kusama has another object that’s really characteristic of her.

Her love of the pumpkin began in childhood. Its special shape, which reminded Kusama of a person’s shape, together with the sense of warmth one gets when holding a pumpkin, are what drove her to paint more and more of them in order to express her impression of the pumpkin. She herself testifies that her current enthusiasm to paint pumpkins is identical to the enthusiasm she had during childhood.

Apart from sculptures, paintings, films, fashion design, poetry and literature, today Kusama also creates spaces where the visitor becomes part of the experience. One of the most interesting moves she made was to allow visitors at exhibitions to take photos and to encourage them to share the pictures on social media. It’s actually just one more way for her to expand her world to infinity and take everyone there with her. The infinity rooms she’s been creating since 1965 invite visitors to enter into Kusama’s world and grasp in the most intimate way the conditions under which she creates and lives every day.

From the opposite direction, the infinity rooms also simulate a sense of a whole universe, in which exist stars and galaxies beyond the world we live in, which are the expansion of our collective consciousness, and lead us, again, to the infinite. And so the rooms represent both universality and in the same breath the individuality of Kusama, of exhibition visitors, and in fact of every detail in the universe.

So Yayoi Kusama is the most successful Japanese artist?

You could say so. You could also drop the word “Japanese”: Yayoi Kusama is an icon and one of the most successful living artists in the world, with hundreds of pieces, some of which have sold for millions of dollars. However, she isn’t the only Japanese person to excel in the world of contemporary art. Another artist who began his journey in Japan, started learning Japanese art, went on to create his own visual language and managed to break through outside of Japan is Takashi Murakami. If you don’t know who that is – you need to!

Takashi Murakami – an overdose of colors and flowers

Murakami, who many people like to call the “Japanese Andy Warhol”, also uses repetition and colorfulness in his art, but comes from a different place. He was one of the first artists to take Japanese animation to the level of fine art, and pushes the limit between the fine and the practical, the exclusive and the commercial, again and again in sophisticated and innovative ways.

He too, like Kusama, has successfully collaborated with Louis Vuitton, and he even designed the cover of Kanye West’s album Graduation (and even created and directed the music video). His art looks like something out of the Japanese world of cuteness (kawaii), but conceals within it grotesqueness, psychedelics, and sexuality that are totally different from the first impression his works might give you.

One of the reasons he’s so important, innovative and influential is that Murakami founded the superflat movement of postmodern artists.

Super describes the extremeness of the members of his generation, some of who are obsessed with anime, computer games, fetishism and immaturity. On the other hand, super describes his ancestors’ uncompromising commitment to the Japanese art that took every technique to the extreme – whether working with the most delicate materials, such as thin gold leaf, or refining a technique over multiple generations until it attains perfection.

The word flat also has several meanings. From a visual perspective, manga and classical Japanese drawings are all flat and have two-dimensional outlines. From a social perspective, Murakami wants to flatten the curve between fine art and everyday art, and make them the same thing. From his perspective, a piece displayed in an art gallery should be appreciated just as much even if it is used as a keyring, pouch, or hat. Conversely, Murkami wants the comics he creates to reach the status of fine art – and he succeeds in doing so. He actually wants to be accessible, but at the same time he wants to be a highly regarded contemporary artist.

Murakami’s art represents today’s culture in a kicking, unapologizing and direct way. There’s lots to be said about every one of his works, and I highly recommend you all visit his exhibitions if you get the chance.